Cities play a decisive role in accelerating climate adaptation as the world’s population is increasingly urban. Nordic cities are well on their way in this transition and are leading the way to a more resilient urban structure by having developed a remarkable and varied range of solutions to address global challenges.

The Nordic master class is a week-long course consisting of lectures and site visits with the aim of sharing the Nordic approach to sustainable development and sustainable urban planning by unveiling how cities can lead the way to a sustainable future. In May, the course welcomed a delegation of 11 representatives from the Chinese cities of Shanghai, Chengdu and Shenzhen, connecting decision-makers, planners, businesses and knowledge institutions to Nordic solutions.

On 21 May, the Chinese delegation of senior planners and decision makers visited the Klimakvarter in Østerbro, which in 2014 became the first climate resilient neighbourhood in Copenhagen. The City of Copenhagen and SLA architects presented how the idea and planning of the neighbourhood came to be and how citizens were engaged to create a functional, resilient and green public space.

Copenhagen stands out as a world leader in sustainable urban transition through their strong focus on people and a legacy of collaboration. In the Klimakvarter in Østerbro, the City of Copenhagen is aiming to future-proof the neighbourhood against heavy rain and torrential downpours. Matias Hede, project leader at Copenhagen’s Centre for climate adaptation, introduced the master class to the city’s holistic approach to urban planning.

As the climate is changing, the City of Copenhagen has recently been dealing with extreme rainfall events, causing damages of several billion DKK and flooding basements as the sewer system was unable to discharge the water. But through the city’s new approach, water from downpours is now transformed from a problem to a resource. Until 2011, Copenhagen’s urban planning approach focused on liveability and transforming public spaces into green urban neighbourhoods by reconnecting the citizens to nature. 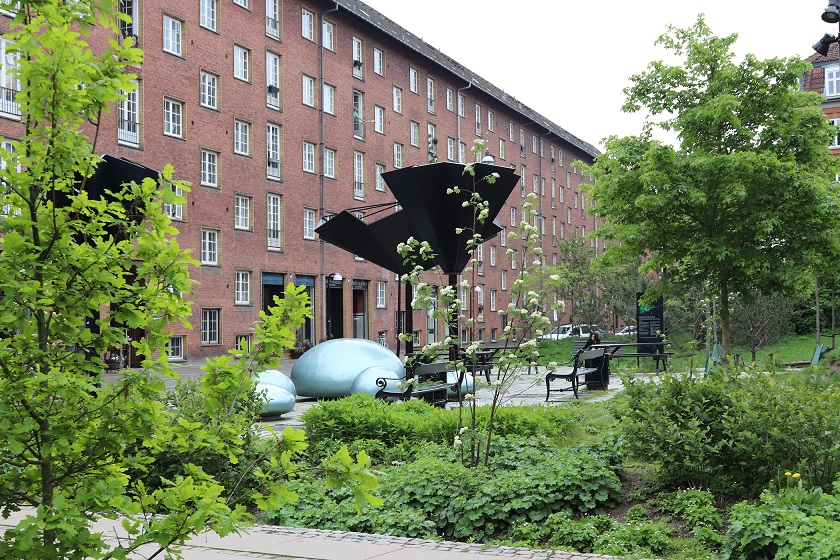 To integrate the Copenhagen Climate Adaptation Plan into their urban planning approach, the city had to consider more technical aspects to find solutions on how to manage larger amounts of water. As a solution, Tåsinge Plads was constructed as a “sewer on open ground”. This climate adaptation approach allows the area to control and retain as much water as possible in local detention until there is enough capacity in the sewer system again to discharge the water to the harbour.

The plan is covering diverse aspects on how to move the city towards carbon neutrality by 2025. It is considering urban challenges such as heavier downpours and higher sea levels and temperatures in the future, but it is also highlighting opportunities that come with the restructuring. Klimakvarter, built in correspondence to the climate plan, functions as an inspiration to the rest of Copenhagen.

Engaging the public at Tåsinge Plads

To build a resilient neighbourhood in Østerbro, the city cooperated with the utility company who also co-financed the project, in order to integrate the functional aspects into their urban liveability approach. Additionally, the city opened up a ‘local city renewal office’ with 20 employees and the aim to engage the citizens in restructuring the neighbourhood. Through social gatherings hosted by the office, citizens were asked to contribute with ideas and inspiration on how to make their neighbourhood more liveable and climate resilient.

The participatory approach of involving the general public in the designing stage of the neighbourhoods really resonated with the master class participants.

“We also need a process to receive this concept and then to know what it really means. But the most important thing is to know how it really works and how to put it into action. When I do my projects in the near future, I will try to use this concept in our design and construction process.”

“I would like to use my own eyes and my own feet to get to know the city and the people”, she continued. The gatherings also served as a platform to bring together all stakeholders involved – citizens, the utility firm, the city and consulting firms – to adjust expectations and to create a sense of future local ownership. The project related not only to the Copenhagen Climate Adaptation Plan, but also to the Climate Resilient Area Plan for Østerbro, a plan covering the liveability aspects of the project and designed by the EIT Climate-KIC supported start-up Tredje Natur.

Building an ecosystem on Bryggervangen

After learning about the measures taken at Tåsinge Plads, SLA architects introduced the master class participants to their approach of integrating nature in urban planning on Bryggervangen and Sankt Kjelds Plads. Their approach creates modern, adaptable cities that inspire a sense of community and diversity through an innovative combination of nature, design, sustainability and technology. The urban planners aimed to create an ecosystem to enhance biodiversity in the city, which they defined as “city nature”, by integrating dead trees and plants, ponds, animals and edible berries representing the city’s landmark for bluegreen climate adaptation. In addition, the area can retain up to 500 m3 of water if needed in extreme weather conditions.

“We need a paradigm shift to achieve a resilient city and to achieve that, we need to work with the municipality.”

The project was initiated by the Danish Business Authority and Nordic Innovation and arranged in collaboration with Quercus Group and EIT Climate-KIC Nordic. The master class delegation from India will arrive in Copenhagen on 16 June for their week-long course in Sustainable Urban Development.

Soil Steam believes that steam holds the answer for...